The US State Department and the Organization of American States declared that they would not “recognize” Maduro’s inauguration.

Venezuelan President Nicolas Maduro was sworn in on Thursday for his second six-year term in office.

Following his electoral victory on May 20, 2018, Maduro was inaugurated in a ceremony held in the country’s Supreme Court.

The inauguration usually takes place before the National Assembly. However, due to the opposition-held legislative body being declared in contempt of court in 2016 and therefore “null and void,” the ceremony took place instead in the Venezuelan Supreme Court, as dictated by the Constitution.

The session was led by Supreme Court President Maikel Moreno, before whom Maduro swore “on the people of Venezuela, the legacy of our ancestors, […] on our liberator Simon Bolivar, on the legacy of our beloved commander Hugo Chavez,” to fulfill and enforce the constitution, as well as to “fight for social and economic prosperity and to build XXI century socialism.”

The inauguration was attended by scores of international guests, including the heads of state from Bolivia, Cuba, El Salvador and Nicaragua, and high-level delegations from China, Russia and Turkey. In total, more than 90 countries were represented, between delegations that came especially for the occasion and diplomatic missions in Caracas.

Likewise in attendance were Venezuelan governors, mayors, ministers, high-ranking officers of the armed forces and members of the Constituent Assembly, as well as representatives from popular movements and political parties from Latin America and elsewhere. International bodies such as the African Union, CARICOM (Caribbean Community), the Arab League, ALBA (Bolivarian Alliance for the Peoples of Our Americas), OPEC (Organization of Petroleum Exporting Countries) and the United Nations were also represented. 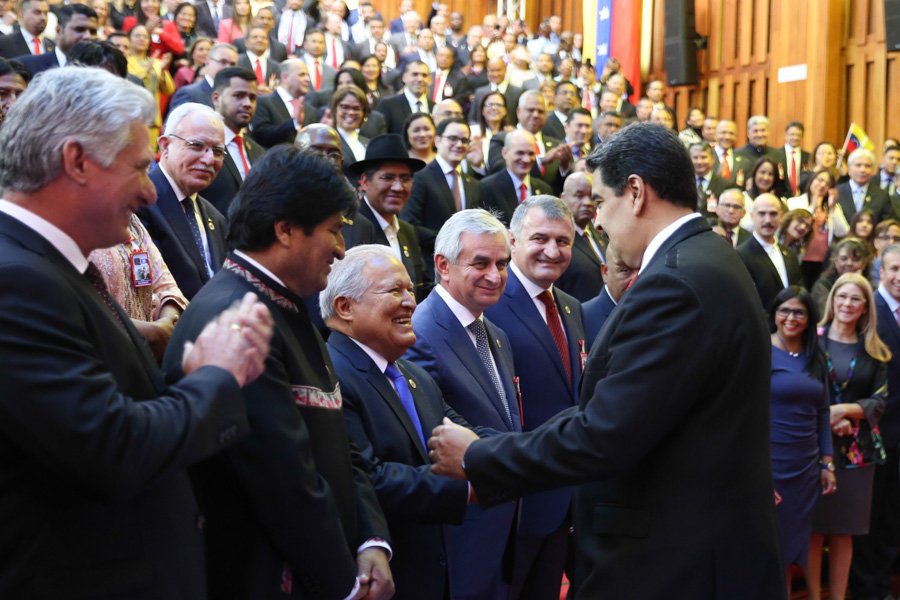 Maduro greets foreign guests ahead of his inauguration. (Presidential Press)

The streets of Caracas and other Venezuelan cities also saw government supporters rally in support of Maduro. In recent days, popular movements had also been setting up “anti-imperialist camps” to defend Venezuela’s sovereignty.

“I tell the people: this presidential sash is yours, this power is yours. It does not belong to the oligarchy or to imperialism. It belongs to the sovereign people of Venezuela!” Maduro declared in his speech upon taking office.

The Venezuelan president denounced what he termed as an aggression being led against the country by “the most powerful empire in history.” He blamed Washington and its Latin American allies for “turning a mere protocol ceremony into a war.”

Maduro also struck a more conciliatory tone, calling on allies and regional blocs such as ALBA to lead efforts to mend relations in the continent, while also suggesting an impromptu summit of Latin American leaders so that issues could be discussed and debated “face to face.”

He concluded by highlighting that the recovery of Venezuela’s economy and the fight against corruption and indolence are the government’s priorities for the near future, pledging to announce new economic measures on Monday before the Constituent Assembly.

Thursday’s events also included a ceremony with the country’s armed forces, followed by bilateral meetings with some of the international invitees. 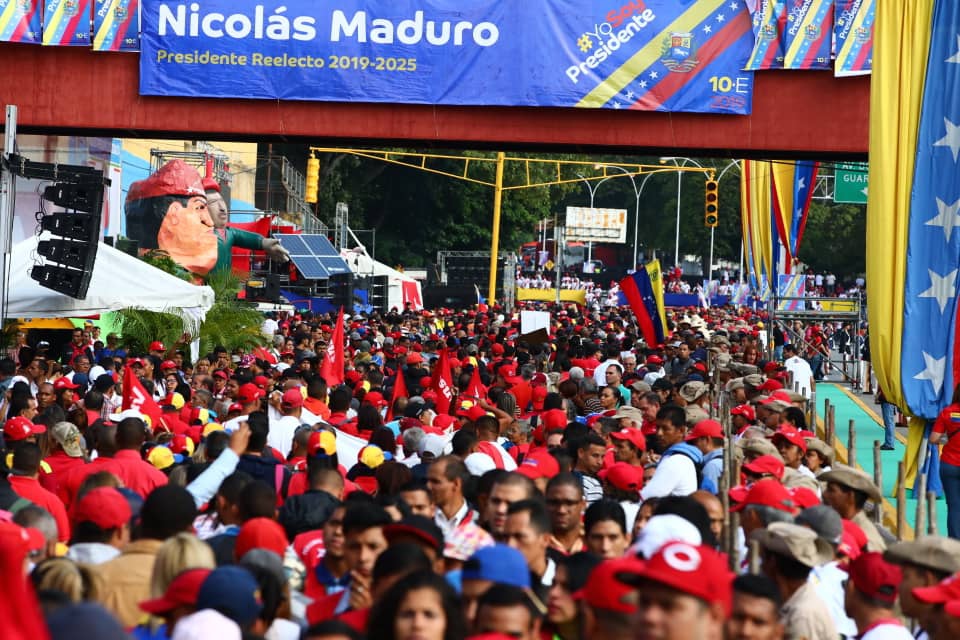 National Security Advisor to the Trump administration John Bolton was one of the first to react, writing in a tweet that the US “will not recognize the Maduro dictatorship’s illegitimate inauguration,” and pledging to continue increasing pressure on Caracas.

The State Department responded along the same lines in a communique, condemning “Maduro’s illegitimate usurpation of power.” The statement went on to call on the Venezuelan security forces to work with the National Assembly on a “peaceful return to democracy.”

The Organization of American States (OAS), during an extraordinary session of its Permanent Council, approved a resolution not recognizing the legitimacy of Maduro’s second term, urging member states to take diplomatic, political, economic and financial measures to contribute to the “restoration of the democratic order” in Venezuela, and calling for new elections to be held. The resolution had 19 votes in favor, 6 against and 8 abstentions.

William Castillo, Venezuelan vice-minister for foreign affairs, qualified the resolution as being “illegal” and not stipulated by OAS statutes. The OAS had previously tried to apply its democratic charter against Venezuela but failed to get the necessary 24 votes, while OAS Secretary General Luis Almagro has been one of the main advocates of “regime-change” in Venezuela, at one point even endorsing a military solution.

For its part, Venezuela announced in April 2017 it would leave the OAS, as a response to the body’s “meddling” in its internal affairs. This process is due to conclude in April 2019.

Diplomatic tensions on the rise

Following the OAS resolution, individual countries also issued their own statements echoing the same points, not recognizing Maduro’s presidency and reaffirming support for the National Assembly.

Paraguay went one step further, with President Mario Abdo Benitez announcing during the day that the country was severing diplomatic ties with Venezuela.

Peru also recalled its charge d’affaires from its embassy in Caracas. Peru and Venezuela have not exchanged ambassadors since July 2017.

The tone for these reactions had been set on January 4 by the Lima Group, formed by 13 Latin American mostly right-wing governments and Canada. In a statement, the group pledged not to recognize Maduro’s second term, calling on the Venezuelan president not to take office. The countries also vowed to “review” diplomatic relations and to impose sanctions on Caracas.

For its part, Caracas lashed out at the statement, with Arreaza calling it a “humiliating subordination” to US interests. President Maduro also held a press conference on Wednesday in which he announced that Lima Group countries had been handed a diplomatic protest note giving them 48 hours to “rectify their positions” before Venezuela advanced with “urgent and crude” diplomatic measures.

Maduro and Arreaza especially criticized the group for interfering in an “exclusively bilateral matter.” In its statement the Lima Group condemned an episode in late December in which the Venezuelan Navy intercepted a ship conducting oil explorations on behalf of ExxonMobil, authorized by Guyana near the disputed Essequibo region. Exxon-Mobil claimed that the ship was in Guyanese waters, but Venezuelan authorities have released pictures and audio recordings backing its version that the ship was in the projection of the Orinoco delta and thus indisputably in Venezuelan territorial waters.